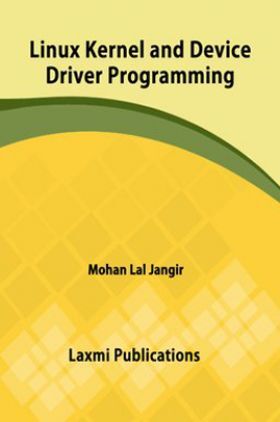 Linux Operating System has grown tremendously in the last two decades since its inception. Linux which started as researchers' and students' experimental OS is no longer limited to universities now. Almost all industries are widely using Linux as their preferred OS. Therefore, knowing Linux is one of the core requirements for any system engineer regardless of the industry or domain.

Linux kernel, largely due to the complexity involved, remains a mysterious area for many. The proposed book is a must read for someone who wants self-learning  and practising Linux kernel and device driver programming.

The book includes the following topics:


Audience of the Book :
This book useful for computer science students.
Key Features:

1. Each chapter has worked out examples for each topic/sub-topic.

2. The book deals with device driver development of real hardware. Therefore, the reader can himself develop a device driver as he progresses through the book.

"Learning app is interesting and very easy method for learning for all the students very good platform for preparation of entrance exam. It is affordable for everyone and easy to use, user friendly and the best collection of books helps the students for preparation of examination. This app is useful for large collection of books from school living to higher education level this is very nice and excellent thank you."

"Hi guys, this is Harsh Prajapati here. I am preparing/performing for Civil Service Exam since 2019 and my journey about Civil Service Exam is little bit complicated because we have to read a lot of books and summarize many current affairs and etc. But Kopykitab is a place where I can get books in easy medium and digital medium and that we call ebooks and my experience about Kopykitab is very impressive for studies but it's helpful for me and you also prepare for many competitive exam and also you can read some story books and what you want to read. So I think it's a nice place so you can also download it from Google Play store and thank you guys."