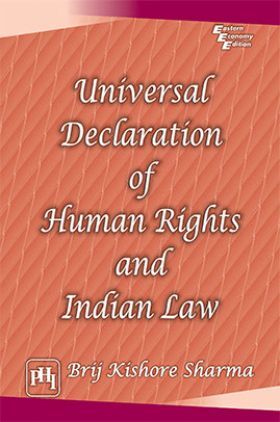 About The Book Universal Declaration Of Human Rights And Indian Law
Book Summary:

The Charter of the United Nations contained a statement that the people of the United Nations reaffirm their faith in certain inalienable Human Rights, in the dignity of human beings and in essential equality of rights of men and women. This statement led to the Universal Declaration of Human Rights which was adopted by the United Nations on 10th December 1948. This Declaration guided, encouraged, and in some cases, put pressure on the nations to recognise these rights or Acts as rights which may be claimed and enforced by citizens and other human beings.

This book contains the text of the Declaration with explanatory comments by the author. It also contains references to relevant articles of the Constitution and sections of various Acts and refers to judgements of the Supreme Court of India. It is the only book that gives parallel provisions of Indian Lawparallel to each article of the Declaration.

The book will immensely benefit all students of Human Rights as part of the courses in Political Science, Law and other related fields. It will be helpful to all those who are appearing for civil services and other examinations conducted by various Public Service Commissions.