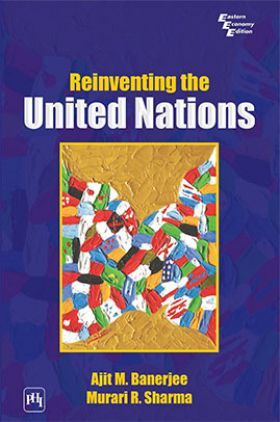 About The Book Reinventing The United Nations
Book Summary:

Established after World War II, the United Nations strives to save successive generations from the scourge of war. This vital world body has undoubtedly succeeded in resolving many conflicts through its political and peacekeeping missions, and nurtured peace through its development support, though not always with the efficiency and effectiveness expected of it. The world is vastly different today from the days when the United Nations was set up. The challenges that the United Nations faces in the 21st century are much more complex and deadly than they were 60 years ago. Reforming and reinventing the United Nations should therefore be a matter of great interest to the international community.

To tackle the challenges ahead, the United Nations needs to re-engineer its organizational arrangements, reorient its processes, revamp its decision-making systems, and reform its human resource and financial management to get the best results from them. This book suggests measures for restructuring the Security Council, rationalizing the constituent systems of the General Assembly, the ECOSOC and the Secretariat, and strengthening the peacekeeping, corruption control and accountability mechanisms.

The book is a collaborative endeavour, involving contributions from international authority figures in areas such as peace and security, development assistance, resource management, leadership and ethics. The vision projected by them on the major issues inscribed on the United Nations agenda is meant to encourage fresh thinking on the part of opinion leaders, diplomats, academics, experts in foreign affairs and UN staff, so that this intergovernmental institution could be effectively geared to respond to the emerging challenges of the 21st century.

Reinventing the United Nations would be of interest to the public and particularly the postgraduate students of political science, international law, and international relations, as well as diplomats, public affairs professionals and social science scholars at various levels.