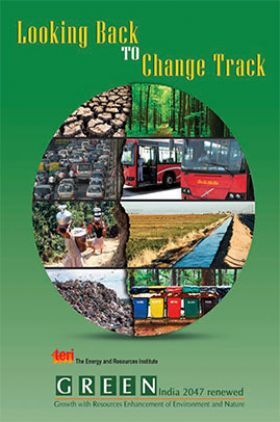 Looking back to change track provides an answer to the questions that have marked the country?s efforts to manage air pollution, water stress, waste disposal, forest wealth, and it?s rich storehouses of biodiversity. In 1997, when India celebrated the 50th anniversary of its Independence, TERI?s assessment of trends in the state of the environment in these 50 years sounded an alarm over the rapid deterioration of the nation?s natural resources. 1997 was also a year when the fruits of economic liberalization were beginning to be realized, but what seemed to have slipped past policy-makers and the public alike was the pressure increased economic growth was exerting on India?s natural resources. TERI estimated that the economic costs of environmental degradation in India already exceeded 10% of the country?s gross domestic product. Released as GREEN India 2047, TERI?s findings made it amply clear that neglecting the state of India?s environment in the quest for development was an unsustainable proposition. The title explains that while in some cases, irreparable loss to the environment has occurred, in others, there still remains time to halt, reverse, and minimize the damage. As we step further into the 21st century, new approaches and strategies are required to tackle the onslaught faced by our vulnerable environment. This publication articulates some of these, which include progressive policy-making, sustained public?private partnerships, increased support for research and development of sustainable technologies, and last but definitely not the least, greater mobilization by civil society to protect India?s natural resources. The message inherent in this book is that the stakeholders of India?s natural resources include no one else but us Indians, and we need to partner each other to bring about a change in the way our environment is managed. For inspiration, we need to go no further than the Father of the Nation himself, whose advice ?Be the change you want to see in the world ? is as relevant to our relationship with our environment as in any other context.