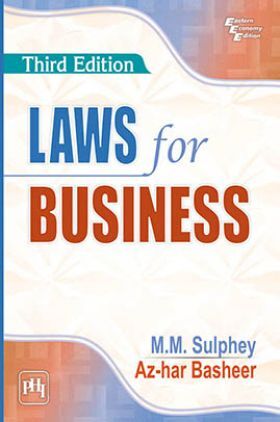 About The Book Laws For Business
Book Summary:

The knowledge of business laws is very important for the survival and growth of any organisation. This comprehensive and well-written book, in its Third Edition, introduces Companies Act 2013, replacing the Companies Act, 1956 (chapter 10). This newly incorporated Companies Act, 2013 is the first major revision in the company law in more than 50 years. This edition brings out the significant changes proposed by the 2013 Act as compared to the 1956 Act. Inclusion of The National Food Security Act, 2013 as chapter 35 is another addition to the book. The book continues to present a thorough discussion of various legal topics such as contract laws, corporate laws, labour legislations, taxation laws and the related acts including the Sale of Goods Act, 1930, the Negotiable Instruments Act, 1881, the Consumer Protection Act, 1986, the Insurance Act, 1938, the Limited Liability Partnership Act, 2008, the Companies Act, 2013, the Foreign Exchange Management Act, 1999, the Information Technology Act, 2000, the Environment Protection Act, 1986, Right to Information Act, 2005, and Right to Education Act, 2009 and other important acts.

The book contains many practical examples and studies of different law cases which makes it more interesting and authentic. In addition, the book provides Review Questions at the end of each chapter. Moreover, mind maps provided in most of the chapters give readers a brief idea about the concepts discussed. More practical exercises in the form of case studies in the questions section, and format of a number of documents makes the book quite informative.

The book is primarily designed for the undergraduate and postgraduate students of management and other related courses for their subject Business Law. Besides the management students, the professionals and legal practitioners will also find the book very useful.