Home Higher Education Law Introduction To The Constitution Of India 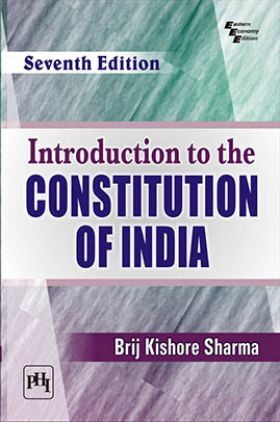 Introduction To The Constitution Of India

About The Book Introduction To The Constitution Of India
Book Summary:

Seventh Edition of this book has undergone thorough revision. It incorporates the 99th Amendment to the Constitution as also the National Judicial Appointments Commission Act, 2014. These Acts have paved the way to a new method of appointment of judges of the Supreme Court and the High Courts. These Acts are likely to come into force soon.

All important decisions of the Supreme Court reported till the end of December 2014 have been duly referred and cited.

The book has been well received as a text for the students of LL.B. and LL.M. It is specifically designed to serve the needs of candidates appearing for Civil Services and Judicial Services examination. It gives a thought provoking and update overview of the Constitution.

What is New to the Seventh Edition

1. New procedure for appointment of judges of Supreme Court and the High Courts.
2. The Constitution 99th Amendment Act, 2014 and the National Judicial Appointments Commission Act, 2014included.
3. A new chapter devoted to Comptroller and Auditor General of India.
4. Mentioning the helpful role of USA in Indias freedom struggle.
5. New chapter on Cooperative Societies and The Constitution 97th Amendment Act.
6. Validating an invalid law.
7. Compulsory retirement is not punishment.
8. Power of Supreme Court under Art. 142.
9. Continuous mandamus.
10.A note on Democracy and Socialism.
11.Events before the Framing of the Constitution (Chapter 1) completely revised.
12.Principles for judging Constitutional validity.
13.Fresh comments on 3 famous cases (Mandal case, Bommai case and A.D.M. Jabalpur case).
14.Difference between Government and a Corporation.
15.Disciplinary proceedings against subordinate judiciary.
16.Numerous other updates and comments.

Preface to the First Edition

1. Events Before the Framing of the Constitution

2. Salient Features of the Constitution

5. Territory of the Union and Formation of States

15. The Supreme Court of India

20. Relations between the Union and the States

23. Freedom of Trade, Commerce and Intercourse

24. Services under the Union and the States

29. Amendment of the Constitution

35. Comptroller and Auditor General of India