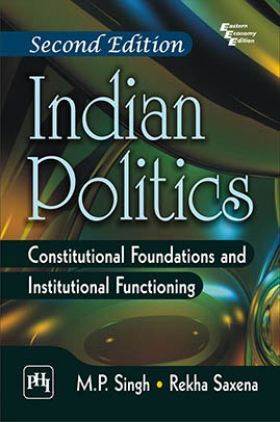 Designed as a standard text for undergraduate and postgraduate students of Political Science and also for the aspirants of Civil Services Examinations, the Second Edition of this book provides a thoroughly updated account of Indian politics, taking into consideration the Indian constitutional foundations and functioning of the various democratic institutions. It gives a holistic view of the political system of India that includes the State, Government (both central and state governments), the market, and the civil society, including infrastructures like the party systems in the nation and the states that are partly in the civil society and partly in the state.

The text begins with a detailed discussion on the nature of the Indian Constitution and moves on to analyze the making of the Constitution, organs of the Government, the bureaucracy, the party system, and the civil society. It gives a retrospective as well as a prospective view on all the topics, giving a composite idea of the issues involved. The new trends in Indian politics are seen through the prism of democratization, secularization, federalization, globalization and regional integration. The text not only provides an updated account of the topics discussed but also brings to light new conceptual and theoretical issues underlying the transformation that is taking place in Indian politics.

Besides undergraduate and postgraduate students, all those who wish to have a deeper understanding of the Indian political system will find the book extremely useful.

WHATS NEW TO THIS EDITION :

New Sections have been added to several chapters:

Table of Contents:
Preface
1. INDIAN MODEL OF CONSTITUTIONALISM: FROM QUASI-FEDERAL, FEDERAL TO QUASI-CONFEDERAL?
2. THE MAKING OF THE CONSTITUTION AND ITS OPERATIONALIZATION
3. A MULTICULTURAL-SECULAR AND DEMOCRATIC-DEVELOPMENTAL STATE IN A GLOBALIZING WORLD
4. PARLIAMENT: GULLIVER IN THE LAND OF LILLIPUT?
5. UNION EXECUTIVE: A CABINET OR A CABAL?
6. JUDICIARY: THE BATTLE OF THE BOOKS AND BEYOND
7. TOWARDS GREATER FEDERALIZATION
8. STATE GOVERNMENTS AND REGIONAL POLITICS
9. LOCAL SELF-GOVERNMENTTHE THIRD TIER OF THE FEDERAL STRUCTURE: AN UNEXPLORED INTERNAL FRONTIER?
10. BUREAUCRACY: THE PERMANENT GOVERNMENT?
11. ELECTIONS: GOING THROUGH THE MOTIONS FOR UNCERTAIN VERDICTS?
12. PARTY SYSTEM: A CONFIGURATION WITHOUT A SYSTEM?
13. CIVIL SOCIETY: GOING THROUGH THE PROCESS OF CIVILIANIZATION?
Epilogue: Indias Tryst with Democracy, Development and Nation-State