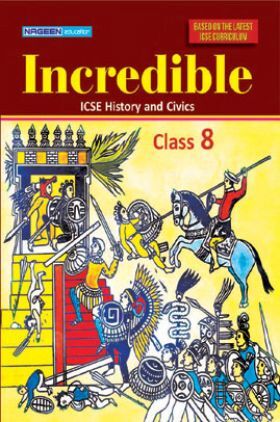 History is often introduced as a subject of chronological events of the past – covering prominent rulers, comparing different dynasties and civilizations, the rise and the fall of the empires and so on. But what makes it different from other subjects is its ability to pass on to its readers the challenges and experiences faced by the different dynasties and civilizations in different geographical locations. To students and learners, history provides cultural awareness and allows them to learn from the past.

Students can approach this subject in two ways: one can be to learn about the rulers, their empires and significant dates and events, and the other can be to gain more knowledge about diverse cultures, kingdoms etc.

The primary objective of ICSE Incredible History is to make the study of history enjoyable for its students with the usage of effective terms, interesting pictures, and useful activities. All these factors contribute to the growth of students and give them an opportunity to comprehend the past in an informed way.

Audience of the Book :
This book Useful for Class VIII Students.
Table of Content:

1. The Beginning of the Modern World

2. The Industrial Revolution and Rise of Imperialism

3. The Age of Revolution

5. Decline of the Mughal Empire

7. Rise of British Power in Bengal

8. Expansion of British Power in India

9. British Policies and Their Impacts

5. Specialised Agencies of the United Nations

"Hi I am Mrinmay Bhatacharya. I am currently pursuing my Bachelor's in Business Administration from Savitribai Fule Pune University. After the COVID-19 outbreak it was very difficult to procure the books physically because all the stores were closed. That's when I found out about Kopykitab. Kopykitab helped me a lot specially during the past two years. I was able to get all the books that I needed for my reference and not only that, I got huge discounts from the application. One of the best features that I found out about Kopykitab app was the ability to take notes and print them if needed. So it helped me during my exams as the last minute preparation tool and also the huge cashbacks that I used to get on every purchase. So I would surely recommend Kopykitab to all my buddies and everyone who needs these books. And it is actually really good because it is very mobile. You can carry it anywhere. You can download app and download the books on that app. So it's really mobile. So I would recommend everyone to download this app. Thank you."

"Hello Everybody, This is Srirad Grover,Iam a tutor of Maths & Science. I have purchased one of the content from KopyKitab and got lot of benefit with this KopyKitab App. I have downloaded KopyKitab App in my phone, it includes multiple books out of which some of them were my purchased bokks & some are free to me. It includes exampler problems which is hardly available anywhere but its available easily here in this app, free of cost. Like i have to give excercise to students for practice purpose. What i usually do is to take snapshot of the exercise & take a print out of the same. It has a lot of material for those individuals who has a interest in any kind of books. According to the downloads you get the recommendations for the particular area of interest. Thankyou!!!!"