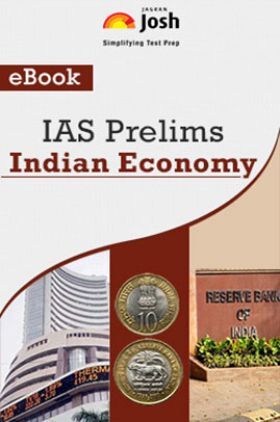 IAS Prelims Indian Economy e-book is specifically designed as per the requirement of the candidates’ preparation of Indian Economy for the IAS Prelims Exam. This book covers whole lot of topics of the Indian Economy and explains the most important concepts of Economics in the easy to understand language. It is meticulously designed for the maximum horizontal coverage of the Indian Economy topics. The Concept of National Income and its calculation is described in details to build a better understanding of the Topic. As India has adopted new standards of National Accounting System, this chapter has acquired greater importance for the IAS Prelims Exam. Economy is a very important subject and helps in understanding the reasoning of the Government behind the important policy decisions. The IAS Prelims Indian Economy covers each and every aspect of the Nature of Indian Economy which is important for the IAS Prelims Exam and helps the candidates in preparing better for the IAS Prelims. The e-Books include the in-depth coverage of the Economic Survey 2014-15, Union Budget 2015-16, International Institutions and the various Government Schemes related to the Social Welfare and Agriculture regeneration. The main highlights of our E-Book are: Coverage of Important Economic Issues of National Importance In-depth analysis of key sectors like Agriculture, Industry and Services. Exhaustive and Sector -wise Coverage of Union Budget and Economic Survey Exhaustive Coverage on Government Social Welfare Schemes Important Organisations related to world economy Exhaustive Coverage of Railway Budget Exhaustive Current Affairs news on Indian and World Economy.

"Hi. I am Atif Ghayas from punjab. I was searching for Auditing and Assurance notes over the internet and found the website offering the notes on this subject. I downloaded and read the notes which are very relevant and crisp in nature. It really helped me in my work. I would highly recommend this website for students and faculties."

"Hello I am Harshita Tiwari from Bhopal and currently I am pursuing BBA. While on the one hand I am a student of BBA final year on the other hand I am also preparing for my CAT exam and it is very difficult to get all notes from any one platform. I have been using Kopykitab since two years and it's really helpful for my study. I have a subscription for my CAT exam. It's really helpful for me and whenever I have any doubts so I can study with that notes. So the first and the very important and the good thing is that we will not have to pay again and again. We can take one time subscription and It helps me a lot. I would like to thank to Kopykitab. Thank you."

"Hi, my name is Ayan Khan and I'm student of B. Tech from government engineering college Bhopal. I cleared JEE Mains last year. As we all know the last time of COVID all coaching institutes were closed i was very worried that how should I clear. Ones My friend told me about that Kopykitab app, he told me that you will get everything in it. When I downloaded the app and after scrolled a lot I came to know about the study pack which also had mock tests. There were also subject wise mock test, topic wise mock test and also there were previous year sample paper and it boosted my confidences a lot. last year I did good preparation and gave my JEE Mains exam so thank you so much Kopykitab."