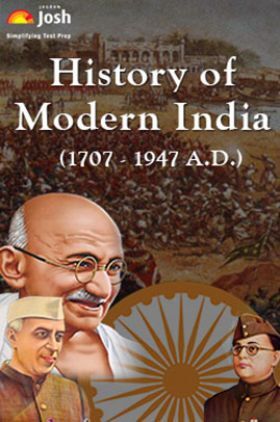 The book on History of Modern India (1707 to 1947 AD) presents an overview of the history of what was known as British India. The book examines the social, economic and political conditions of India during 18th century with an attempt to explain why India fell prey to the British East India Company and later to the British Crown. It goes on to detail the political, administrative and economic impact of British rule in India as well as wider view of social forces, movements, institutions and individuals in order to understand why certain events happened and analysis the consequences of such developments within a chronological framework. Further the emergence of the Nationalist movement in India through the formation of Indian National Congress for the attainment of Indian Independence with the emergence of the Indian National movement under the leadership of Mahatma Gandhi. Therefore, the entire book is designed and equipped with the evolving nature of various Competitive Exams like UPSC (IAS, IPS etc), PCS, SSC, All Railway exams, CDS, NDA, CPO-SI, UGC-NET etc. and similar other exams. Main highlights of the book: - The entire book of History of Modern India (1707 to 1947 AD) consists of 5 Units which are further divided into 15 Chapters and each chapter have various MCQs, statement based questions etc. in very lucid, concise and balanced manners which help students to retain what they have learnt in the chapters. - With the beginning of each chapter, a tree chart has been provided to give an overview of the relevant topics inculcated in the chapter. - Important events which are occurred in the past and are relevant to the examination point of view have been given in the form of tables, various Nationalist leaders & their contribution in the form of lists and chronology of Governor - General & Viceroy etc. which make learning as well as revision at the last moment easier. - 400 + important questions are framed on the basis of latest examination pattern which have been given in the form of practice sets at the end of the book.

"My name is Chandan. I have purchased a book that is called Air Polution Control from Kopykitab.com. Its price almost 34 rs to 35. But is this book is very useful to me because i have no syllabus for this subject. I was studying in engineering and at that time I did not get notes from friends, nor did I get any sir, could not go to college. After purchasing this app we got it easy in writing and its helped me to perform well in exam and this book includes 145 pages only in 35 rs.In Kopykitab.com have a good books and it's beneficial to all to purchase. I was so surprised they prepared a book with notes of our according door service level.It is very useful to me. So thank you so much to kopykitab.com. And the lines are easy to understand and easy to memorize. It's very easy to understand. So I will suggest you to please use Kopykitab.com for future studies in your future days. Thank you."

"Good afternoon to all. I am Professor Pankaj Raghuwanshi. I am teaching Antenna And Wave Propagation in six semesters. I am using Kopykitab notes by reading the notes. Language is very simple and example is really good. By the vision of the note and this topic of notes, students understand how to approach the questions theory and basic concepts. So it is very useful for faculties and students. Thank you"

"Hello, I am Nikhar Agarwal from Satna Madhya Pradesh. I am 22 years old so a year back I was preparing for Banking Exams and I was really confused from where I should study. So one day I received a call from Kopykitab and they told me the services they are offering for studies. So I decided to take one and everything was so easy and convenient there. They provide online test series, mock test all the study materials in one platform so I would like to thank Kopykitab as they helped me a lot in achieving my dream job. Thank you."