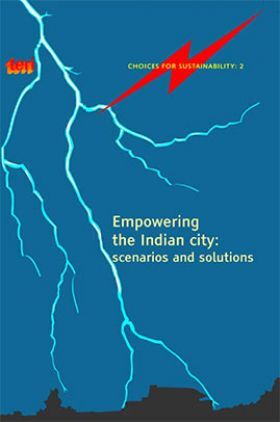 All over India, the shortage of power is a reality that affects all walks of life, all kinds of people. Among its most tangible impacts is the shortage of electricity in the domestic sector. Despite the fact that India's capacity to generate power has grown from 1362 MW at the time of Independence to over 100 000 MW in 2001, there is still, on an average, an eight per cent shortfall. Each person in India can use about 350 kW of power every year, and this is among the lowest per capita averages in the world. Hours of load shedding, sweltering summers, and cold winters without enough power are all common experiences for the average Indian. Generators and inverters are fast competing with refrigerators and televisions as hot-selling consumer goods. 'Empowering the Indian city: scenarios and solutions' is an attempt to bring into focus the various issues that confront development in the Indian power sector, with special reference to the urban power supply to the domestic sector. It puts forth a multitude of choices that exist before the Indian citizen, the government, and the industry to create a future where electricity can be a resource not so ridden by scarcity and bad quality. Many of us have often thought about what alternatives exist before us, other than buying a cost-intensive, polluting generator, or an inverter that will hike our electricity bills considerably. This concise book tries to list out a few ways of bridging this shortage by focusing on alternative energy sources, energy-efficient lighting, and governmental reform, which is already in the pipeline. It is a book not just about shortage of power. It is also about the theft of power, bad management practices in the sector and the misuse of power, faulty tariff systems, and low quality in what is supplied to the consumer as usable power. It is also about the future of power reforms in the country and which way they are headed. Most importantly, this book also puts forth the do-it-yourself techniques, specially the wide choice of energy-efficient lighting that is today available to the consumer. There is much we can do to save electricity, an action that will make things better for us in future.