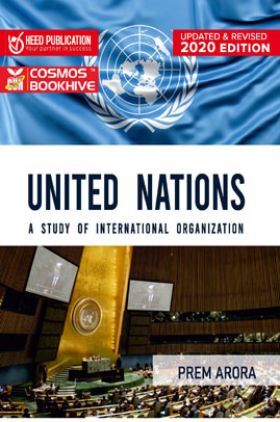 The warm reception accorded to the first edition of this book has encouraged me to thorough by revise the book. Certain dimensions which had escaped my notice in the first edition of the book have been added in the presence edition. Effort has been made to incorporate latest facts and developments to make the book update and more useful for the students and teachers of United Nations. My task of revisions of the book was rendered easy on account of numerous suggestions sent by esteemed readers. I convey my gratitude to these readers and hope that in future also they will continue to send their valued suggestions.

The establishment of the United Nations in 1945 was a turning point in the history of international system. It reflected the determination of the member states to eradicate the scourge of war and conduct their relations on a different footing. But since its establishment conflicting opinions have been expressed about the role of the United Nations. Its critics say that the United Nations has failed to achieve its main objective of maintaining world peace and proved quite ineffective on account of great power diplomacy, regional groupings and military pacts. On the other hand, its admirers claim that the United Nations has solid accomplishments to its credit. Its peace-keeping forces have contained hostilities; it helped the colonial people to attain independence and full sovereignty; provided shelter and relief to the refugees; promoted respect for human rights by adopting large number of instruments; expanded and codified international law; eradicated several diseases, etc. An effort has been made in this work to encompass the shortcomings and achievements of the United Nations and to provide a fair assessment of its working.

2. The League Of Nations

3. Origin Of The United Nations And Its Purpose

6. The Economic And Social Council

10. United Nations And Problem Of Membership

16. Specialised Agencies Of The United Nations

24. Assessment Of Working Of The Un And Future