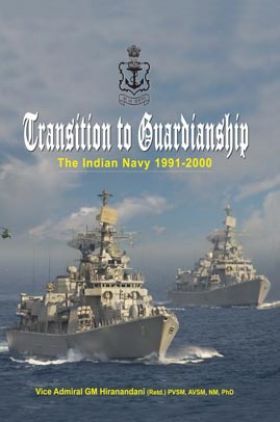 Transition To Guardianship The Indian Navy 1991–2000

The period 1991-2000 was a challenging time due to the sweeping changes in the geopolitical and economic fronts. In the wake of Gulf War, the world witnessed the spectre of spiralling inflation due to a hike in oil prices. The unprecedented spike stunned the defence budgets which called for extraordinary abilities to cope with the grim circumstances in the face of limited funding for defence projects. It was a time of trail for the Navy as it was called upon to do ‘much more with much less’. The situation was aggravated with the disintegration of the USSR, India’s biggest defence supplier. It led to the discarding of the existing Rupee Rouble agreement and a demand for hard currency for defence procurement.

It is testimony to the Navy’s tenacity and resolve that it yet performed with aplomb. Using innovative means, the force level decline was effectively arrested by preserving equipment, innovating to produce in-house designs, encouraging indigenous production and by an improved Public–Private Industry partnership in defence production.

1. Sea Lines of Communication & Choke Points in the Indian Ocean

2. Major Navies in the Indian Ocean

6. Operation Swan on the West Coast

9. Operation Talwar during the Kargil War in 1999

10. The Navy’s Participation in the Expeditions to Antarctica

23. Third Naval Base at Karwar

26. The Contribution of Research and Development to Self-Reliance

31. The New Management Strategy (NMS) — Budgetary Reforms in the Navy

33. Changes in Command and Control Structure

37. The New Naval Academy at Ezhimala

44. The National Cadet Corps and its Naval Wing