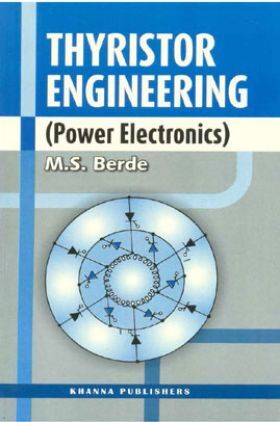 The ‘Thyristor’ or Silicon Controlled Rectifier (S.C.R.) was first invented by Bell Laboratories in U.S.A. in the year 1948 and it was first introduced in the market by General Electric Company in the year 1957. However, commercially it started becoming available after 1960. Since this time there has been a rapid growth in the control equipment making use of thyristors. Initially however for a period of 5-6 years the failure rate of the equipments hampered the growth of thyristorised equipment in industry. This however did not cause any break in the building up of know-how and technical literature has been piling up since, at a rate of about 200 reported articles per year on various aspects of this technology. It will not be wrong to say that the present state of thyristor technology has been a result of about ten years effort in all directions including development in semiconductor and printed circuits technology.

Audience of the Book :
This book Useful for Electronics & Electricals Engineering Students.
Table of Content:

1. An Introduction of Thyristor Engineering

3. Thyristors and Their Characteristics

8. Converter Circuit Faults and Thyristor Protection Against Overvoltage and Overcurrent

14. Heat Sink Calculations and Cooling of Diodes and Thyristors

20. Series and Parallel Operations of Diodes and Thyristors

23. Applications of Thyristors to the Power Systems

Top Searches in Electronics And Electricals :