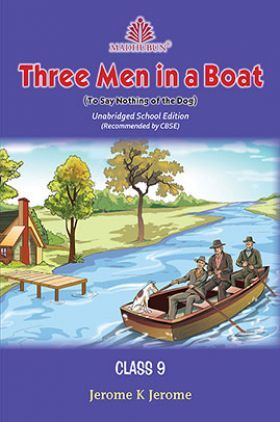 Three Men in a Boat (Combined)

Three Men in a Boat (Combined) by Madhubun
Book Summary:

Jerome Klapka Jerome is one of the most eminent writers and humorist of 19th century England. He is best known for the humorous travelogue Three Men in a Boat (1889). He was born on May 2, 1859, in Caldmore, Walsall, England to Jerome Clapp and Marguerite Jones. He had two sisters, Paulina and Blandina, and one brother, Milton, who died at an early age. Jerome attended St Marylebone Grammar School. He wanted to associate himself with politics or literature, but the death of his parents at an early age forced him to quit his studies and find work to support himself. Initially he worked at the London and North Western Railway for four years. Then in 1877, Jerome joined a repertory theatre troupe under the stage name Harold Crichton, but failed to make a career. It was only in 1885 that Jerome found success with his comic memoir On the Stage—and Off, which was about his experiences with the theatre troupe. A collection of humorous essays, Idle Thoughts of an Idle Fellow followed in 1886. On June 21, 1888, Jerome married Georgina Elizabeth Henrietta Stanley Marris. The couple honeymooned on the Thames ""in a little boat"", a fact which has a significant influence on Jerome's most important work, Three Men in a Boat. In 1926, he published his autobiography, My Life and Times. Soon after, a title of ""Freeman of the Borough"" was conferred on him by the Borough of Walsall. During a motoring tour from Devon to London via Cheltenham and Northampton in June 1927, Jerome suffered a paralytic stroke and a cerebral haemorrhage, and breathed his last on June 14. He was cremated at Golders Green and his ashes were buried at St Mary's Church, Ewelme, Oxfordshire.