Home School Class 9 The Merchant Of Venice (Textbook with Paraphrase) 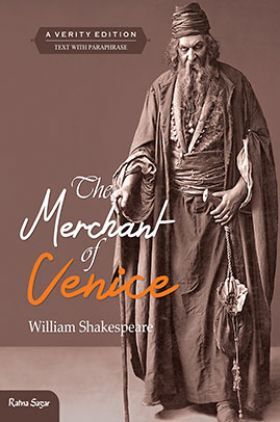 The Merchant Of Venice (Textbook with Paraphrase)

THE MERCHANT OF VENICE: Perhaps the most singular of Shakespeare’s romantic comedies, The Merchant of Venice is best remembered for its dramatic scenes, moving speeches, and the unforgettable character of Shylock.
Though not the merchant of the title of the play, Shylock wrests for himself a centrality of role that places Shakespeare much ahead of his times – more or less a revolutionary, almost an iconoclast.
This special student edition of The Merchant of Venice by Ratna Sagar follows closely the A W Verity edition not only with respect to the text but also annotations, which are suitably simplified for young readers.

Ratna Sagar proudly presents special student editions of select titles of Shakespeare. Instructionally designed after the pattern of the ICSE and ISC curriculum, these titles are a worthy addition to any library, and a great resource for any student wishing to read Shakespeare.
TEXTBOOK WITH PARAPHRASE: the paraphrase edition has the original text and its modern English translation, supported byexhaustive annotations. A great way to simplify Shakespeare!

Books similar to The Merchant Of Venice (Textbook with Paraphrase)