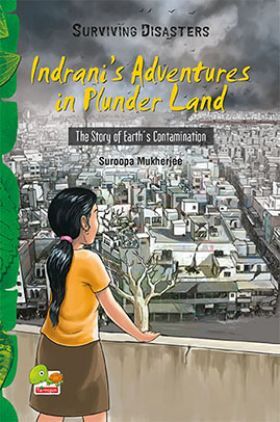 Engulfed with the plight of environmental degradation on planet Earth, Indrani gets lost in the fantasy world of Plunder Land – an enigmatic place where strange incidents occur, including the sudden disappearance of her brother and the abduction of some children. Indrani happens to be the only witness of these intriguing episodes…. Grief-stricken and lonely without her brother, she takes it upon herself to unravel the mystery behind these events. Read Indrani’s Adventures in Plunder Land to know how she reconnects with her lost brother through cyber games and the help of Miao, a mutant cat.

About the Author:
Suroopa Mukherjee teaches literature at Delhi University. She also enjoys writing fiction for children and young adults. Her
stories combine high adventure and serious issues. She admits that writing for children is rewarding, because children are
sharp critics and genuine fans.

Table of Contents:
• In the dead of night
• Action at the railway station
• Action at the cricket stadium
• Action at India Gate
• A lone witness
• Stop playing games
• A long lost story
• The story of a lost dream
• The game of life begins
• The blueprint
• Searching for clues
• Where is Plunder Land?
• A shocking revelation
• The death trap
• The seat of power
• Dangerous evidence
• The overreacher
• The mystery of the missing floor
• The chase begins

"Hey everyone, this is Rasha Anwar from Delhi Public School, Delhi. I studied 9th standard and today I would like to share my experience with Kopykitab. When I moved on to the higher grades, I was really facing a great difficulty with the vastness of the subject but then I got to know about Kopykitab. This app has an number of resourceful ebooks which can help you. This is an app which has separate revision notes and also separate notes for each topic. This app helps me understand my topics better and also from the revision worksheets, I can check that how much I have learned. Thank you."

"Hello Everyone, My name is prajjwal & I have cleared my CS Professional exam in Dec 2021, while preparing i have purchased study material from Kopykitab which is a only platform were you can read it on your mobile, Laptop or PC whatever you want actually its very convenient and the quality of the material is quiet good it gives alot of clarity towards exam, I would highly recommend do consider buying study material from kopykitab. Thankyou KopyKitab!!!!"

"Hi, My name is Rakshitha Maganur pursuing my CA Intermediate, Here am sharing my experience about India's no.1 Digital Library KopyKitab. As you know ICAi expects to have a depth knowledge about the concept & the termonoligies we use must start with the edge of the normal answer. As exams are approaching it is neccessary for a students to solve past year question papers i.e RTPC & MTPC. The best way to get it is through kopykitab at affordable price and also it is very flexible for the students which can be easy to access through their mobile phones & laptops which contains more than 20 question papers students will get the confidence to crack there exams easily. Thankyou!!!!"