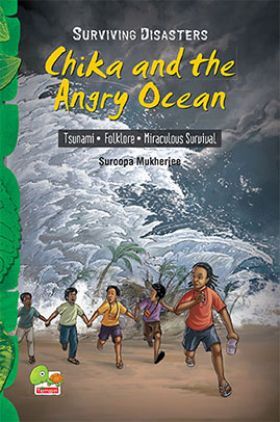 On 26 December 2004, while the world was resting after celebrating Christmas, tsunami struck the Indian Ocean and took Andaman & Nicobar Islands under its spell. Chika, the little boy of the Onge tribe, was warned by the old man in the forest about the ocean rising and swallowing the Earth. The old man's traditional wisdom and Chika's presence of mind saved the lives of the people he loved from the dreadful sway of the killer waves. This story is about Chika's courage, sacrifice, and above all, of the life-wisdom of the Onge tribe!

Suroopa Mukherjee teaches literature at Delhi University. She also enjoys writing fiction for children and young adults. Her stories combine high adventure and serious issues. She admits that writing for children is rewarding, because children are sharp critics and genuine fans.