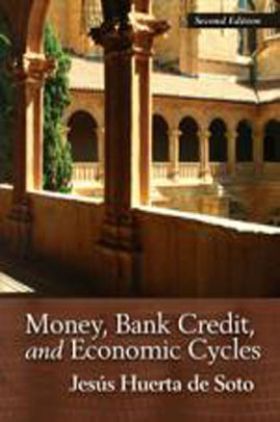 Can the market fully manage the money and banking sector?

Jesus Huerta de Soto, professor of economics at the Universidad Rey Juan Carlos, Madrid, has made history with this mammoth and exciting treatise that it has and can again, without inflation, without business cycles, and without the economic instability that has characterized the age of government control.
Such a book as this comes along only once every several generations: a complete comprehensive treatise on economic theory. It is sweeping, revolutionary, and devastating--not only the most extended elucidation of Austrian business cycle theory to ever appear in print but also a decisive vindication of the Misesian-Rothbardian perspective on money, banking, and the law.
JÃ¶rg Guido HÃ¼lsmann has said that this is the most significant work on money and banking to appear since 1912, when Mises's own book was published and changed the way all economists thought about the subject.
Its five main contributions:

Those are the main points but, in fact, this only scratches the surface. Indeed, it would be difficult to overestimate the importance of this book. De Soto provides also a defense of the Austrian perspective on business cycles against every other theory, defends the 100% reserve perspective from the point of view of Roman and British law, takes on the most important objections to full reserve theory, and presents a full policy program for radical reform.

It was Hülsmann's review of the Spanish edition that inspired the translation that led to this Mises Institute edition in English. The result is astonishing: an 875-page masterpiece that utterly demolishes the case for fiat currency and central banking, and shows that these institutions have compromised economic stability and freedom, and, moreover, are intolerable in a free society.
De Soto has set new scholarly standards with this detailed discussion of monetary reform from an Austro-libertarian point of view. Huerta de Soto s solid elaboration of his arguments along these lines makes his treatise a model illustration of the Austrian approach to the study of the relationship between law and economics.
It could take a decade for the full implications of this book to be absorbed but this much is clear: all serious students of these subject matters will have to master this treatise.
Download Sample PDF
Tags: Money Bank Credit and Economic Cycles eBook Finance B.Com Finance English Finance Textbook