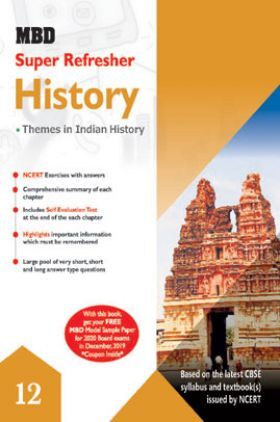 The topics are thoroughly described in simple language making it easier for students of Class - XII to grasp the subject.

The various theories of significance are illustrated in detail through examples. The general statements of important principles and their methodologies are without exception provided through their practical illustrations.

Audience of the Book :
This book Useful for Class - XII students.
Table of Contents:

1.Through the Eyes of Travellers—Perceptions of Society

4.Peasants, Zamindars and the State—Agrarian Society and the

1.Colonialism and the Countryside Exploring—Official Archives

2.Rebels and the Raj—The Revolt of 1857 and its Representations

4.Mahatma Gandhi and the National Movement

5.Civil Disobedience and Beyond

"Learning app is interesting and very easy method for learning for all the students very good platform for preparation of entrance exam. It is affordable for everyone and easy to use, user friendly and the best collection of books helps the students for preparation of examination. This app is useful for large collection of books from school living to higher education level this is very nice and excellent thank you."