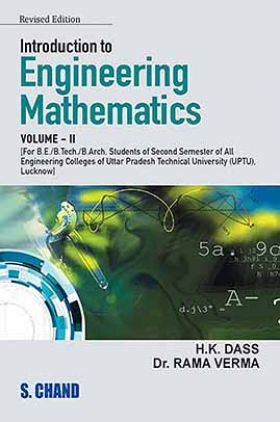 The book has been thoroughly revised according to the New Syllabaii of Gautam Buddha Technical University, Lucknow. Question papers of 2010, 2011 and 2012 have been solved & included at the end of textbook. The misprints which came to my knowledge, have been removed. The previous edition book had the text material for both First & Second Semesters. Now to make the book handy, we have bifurcated the book in two parts, Volume I and Volume II. Volume II of the book is for Second Semester Students.


Audience of the Book :

3. Fill in the Blanks

"Hello Everybody, This is Srirad Grover,Iam a tutor of Maths & Science. I have purchased one of the content from KopyKitab and got lot of benefit with this KopyKitab App. I have downloaded KopyKitab App in my phone, it includes multiple books out of which some of them were my purchased bokks & some are free to me. It includes exampler problems which is hardly available anywhere but its available easily here in this app, free of cost. Like i have to give excercise to students for practice purpose. What i usually do is to take snapshot of the exercise & take a print out of the same. It has a lot of material for those individuals who has a interest in any kind of books. According to the downloads you get the recommendations for the particular area of interest. Thankyou!!!!"

"Hello everyone, My name is Saloni and I am from career college Bhopal. I'm doing my B. Sc. graduation in physical nutrition and dietist because of my new subject, I couldn't find my books in the online app or online market. So someone recommended me about the Kopykitab app. I installed this app and started using it. When I searched my clinical nutrition books on this app they were actually available in the ebook form and it was more helpful and useful for a hard copy. So I would like to recommend everyone to use at least Kopykitab app. It is very helpful, easy and more useful. Thank you."

"Hi, This is Priyanka Saha, Iam from West Bangal State, Kolkatta & Salt Lake city. Currently iam doing BCA 2nd from BIMT. Few months ago when i was in 2nd Semester, I purchased a book that is value & ethics of profession from kopykitab. It helps lot, i got 9.6 SGPA on my 2nd Semester. As i am not getting any sufficient book for this particular subject from my college i switch to it. From here you can see there are 2 options as you can rent it or you can buy it normally. If you are in financial problem or issues you can go an rent for it or otherwise you can purchase it normally. I personally recommend that you guys can go & rent or purchase any book from kopykitab. Thankyou!!!"