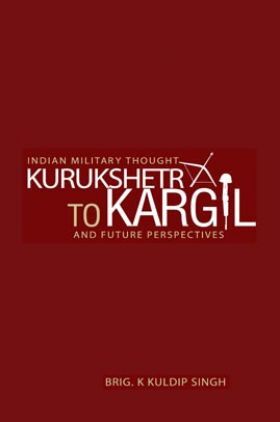 The title aspires to present a panorama of India’s yet to be fully discovered martial heritage, denoted by its unconquerable ancient epoch, a critique of the generally misread medieval age vicissitudes, followed by a survey of the contemporary & post-independence travails and triumphs. Not a historical narrative, it attempts to define what constitutes India’s natural-born military mind, how it evolved and breasted the world-conquering armies, followed by critical glimpses of the past ordeals, besides its uncelebrated defiance & conquests. The venture culminates in defining the nation’s prospective defence and development policy imperatives, for its emerging global role. It is rare in providing in one volume India’s scintillating perspective of the past, present and the future.

The ardent quest, spanning over twelve years, is a reflective blend of a review of the Vedas, the Epics, relevant Shastras & other select material of help, with the author’s long years of rich military operational, planning and instructional experience. Poring over its pages answers many elemental questions, coming naturally to a lay reader, student, research scholar, man-at-arm, defence analyst and the policy maker. The thesis fills a gap by covering a wide range of archeological, historical, politico-military, socio-cultural and strategic and warfare issues, besides dispelling certain myths, which tend to demean India’s way of life and war fighting. The scrutiny of the post-independence wars comes to several untold finds. An exclusive study on ‘what motivates men in combat’ gives the subject an added depth.

2. The Vedic-Age Art of War

3. The Role Pragmatic, the Mahabharata

4. The Post-Vedic Art of War

8. Breakdown of the Hindu Defence System

10. The Chapters of Indian Glory

18. What Motivates Men in War: A Study