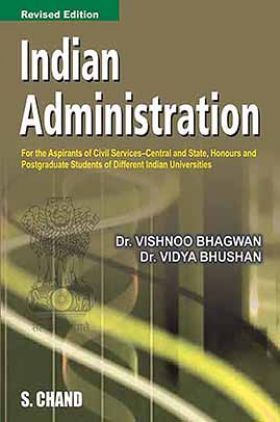 Indian Administration has been written primarily to serve the requirements of the young students appearing for the civil services examinations. this latest book on the subject would amply cater to the needs of the students of Public Administration of various universities and also serve the general readers who would like to acquaint themselves with the administrative system of the country since Kautilya’s times.

In the fifth edition ,the chapters pertaining to top functionaries whose political acumen and administrative calibre get ample opportunities to be tested in coalitional politics necessitating judiciousness practical sagacity, marked adaptability and above all unimpeachable integrity have been paid special attention.

A few new topics viz Women Empowerment sizable reservation for the OBC and keenness to accommodate minorities in the public services ; well conceived Electoral Reforms leading to exemplary conduct of elections of XVth Lok Sabha and that of State Assemblies in the largest democracy of the world; Aggravation of Law and Order problem resulting in the inception of New Protective Agencies at the Central and State levels and a fair assessment of their working as regards redressal of genuine grievances of the masses ; the appraisal of the role of the President at the Centre and the Governors in the States on account of Hung Parliament and State Assemblies and Fractured mandate ushering in era of coalition governments ; the significance and likely misuse of Article 356 ; the passage of 73rd and 74th amending acts resulting in the strengthening of grass root democracy in the urban and rural areas — all these political events and their consequences have been dispassionately debated and analytically appraised.


Audience of the Book :
(For the aspirants of Civil Services–Central & State, Students of Honours and Postgraduate Classes of different Indian Universities

• Administration Of Law And Order

"Hi, This is Priyanka Saha, Iam from West Bangal State, Kolkatta & Salt Lake city. Currently iam doing BCA 2nd from BIMT. Few months ago when i was in 2nd Semester, I purchased a book that is value & ethics of profession from kopykitab. It helps lot, i got 9.6 SGPA on my 2nd Semester. As i am not getting any sufficient book for this particular subject from my college i switch to it. From here you can see there are 2 options as you can rent it or you can buy it normally. If you are in financial problem or issues you can go an rent for it or otherwise you can purchase it normally. I personally recommend that you guys can go & rent or purchase any book from kopykitab. Thankyou!!!"

"Started using Kopykitab app. I am very satisfied with its feature. It has a unique features, so it's a very excellent app. Thank you."