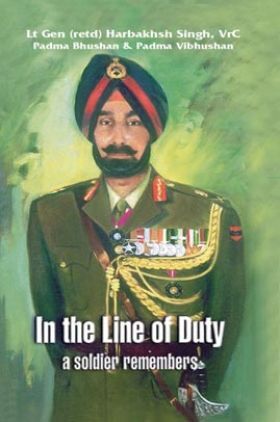 In The Line Of Duty A Soldier Remembers

In The Line Of Duty A Soldier Remembers by Lt Gen (Retd) Harbakhsh Singh
Book Summary:

Walking tall, literally, and figuratively, Lt Gen Harbakhsh Singh, VrC, was one of the most gallant and outstanding officers of the Indian Army. He was among the first batch of officers commissioned from the Indian Military Academy, Dehradun. His military career of nearly 35 years was acknowledged for his distinguished service of an exceptional order.

He commanded the 1st Battalion the Sikh Regiment during operations in J&K in 1947-48; the historic battle of Shelatang was fought under his command; Battle of Tithwal won him the award of Vir Chakra.

He had the rare distinction of having had combat experience in command of troops of or against many nationalities, at all levels of command from a platoon of 40 men to an Army Group consisting of 400,000 military personnel.

7. The Brevet Rank and Regimental Marriages

10. Surrender to the Japanese

12. Destined for Rahal Island & the Death Railway; Passed on to the Japanese Air Force Instead

14. Our Life as Prisoners-of-war Continues

16. Hospital Facilities for Prisoners-of-war at Singapore

18. The Struggle to Stay Alive

28. Advance of 163 Infantry Battalion to Tithwal

29. The Capture of Tithwal

38. Taking over Command of 33 Corps at Siliguri