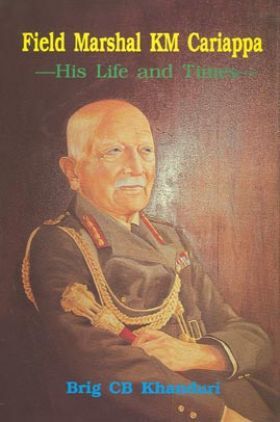 Field Marshal K. M. Cariappa: His Life and Times narrates, for the first time, the full story of the life and times of India’s first Commander-in-Chief, a soldier and a diplomat and above all. a patriot. Coming immediately after his death at the age of 93, this assiduously researched biography gives a total insight into his life and deeds that have immortalised him.

Cariappa’s life has been a fascinating compound of character, luck and circumstances. His meteoric rise from 1947 to the pinnacle enabled him to frame the Indian Army - and other services - into his mould of tenacity and resilience.

The book, devotes itself adequately to episodes of his one-mancrusade to let the Armed Forces remain undivided for the duration of the Partition in 1947, when everyone was bent on doing so. Aspersion was cast freely on his political ambition at that time. As C-in-C his skirmish with the politically supported bureaucracy to safeguard the dignity of his office had repercussions on civilmilitary relations but he steadfastly stuck to his position. Hearing Nehru say that “the Chinese will safeguard the northern border and that, he as C-in-C should worry about J&K and Pakistan,” shook him and he could see how removed the leader was from strategic reality.

2. The Beginning of a Legend

3. The Staff And The Order of the British Empire on the Japanese Front

5. The Environment of Transformation

7. The Indian Army on Trial

8. The Legend of Cariappa: the Commander-in-Chief

16. The Noble Cariappa : A Niche in Immortality