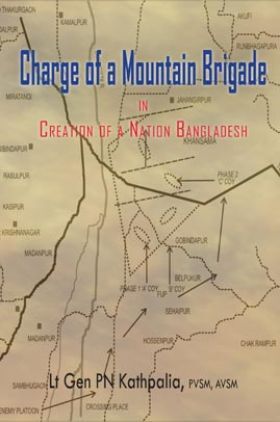 Charge Of A Mountain Brigade In Creation Of A Nation Bangladesh

Charge Of A Mountain Brigade In Creation Of A Nation Bangladesh by Lt Gen PN Kathpalia
Book Summary:

The exploits of the 71 Mountain Brigade – “The Brigade of the Year” begins with its having the lush green hills of Nagaland to fight the war of Liberation of Bangladesh shoulder to shoulder with the Mukti Bahini. From the time it left its location in Limakong (MANIPUR) till it finally settled down in Barrackpore, it went through eight formations in a short period of seven months moving from place to place. The Brigade was the first to enter Bangladesh from the North and the first to take the surrender and return to India. This formation did the longest advance in the shortest possible time and according to the Pakistanis “the entire action went with the precision of a clock work and according to the Book”.

It was the integral brigade of 9 Mountain Division, which was placed under command of 8 Mountain Division for insurgency operations. From there it moved to defend the 1,200 mile-long Siliguri Corridor and then with a stroke of luck got converted into the Independent Brigade Group for the duration of the war. It reverted to its original self and was looking after Calcutta in aid of civil authorities in 1972 after the war. Thereafter, it finally managed to be an integral part of 6 Mountain Division.

1. Genesis of the Conflict

6. On to Boda and its Capture

7. Advance to Thakurgaon and Change of Pak Brigade Commander

10. Birganj and Battle of Kantanagar Bridge

14. The Area of Operations

15. The Opposing Sides: Plans and Prospects

20. Comments on the Operations