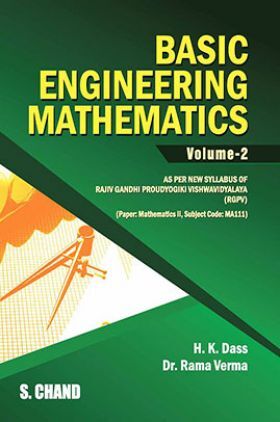 This book is revised according to the new syllabus of mathematics of second semester for all Engineering colleges affiliated to Rajiv Gandhi Proudyogiki Vishwavidyalaya, Bhopal (M.P.). This book also covers the B. Tech., (B.E.) B. Arch. II semester course of other Indian Engineering colleges. This book is divided into 12 chapters on the topics of the syllabus so that the students can easily understand the subject.

1. Lots of examples have been solved so that the students can understand working method to solve a problem.

2. Lot of pair has been taken on the emphasis of the concept of mathematics.

12. THE METHOD OF SEPARABLE VARIABLES

"This is Saravanya, Assistant Professor from Department of Computer Science. I have downloaded KopyKitab app three, four months before and this app was very useful for me. I can download previous year question papers of UGCNET examination and I'm preparing for my examinations through this app. I downloaded an open source technology book also from this app and it is very useful for me to read a book through offline mode. Thank you Kopykitab."

"Hello Everyone, My name is Gopesh Bansal. I belongs to Patiala District Punjab. Iam a student & am studying in 8th class. Few days before from kopykitab.com have downloaded one of the book named as Yes, I Can Learn English this book is very nice it includes around 1100 pages, it costs 50/- which is not very costly for any one, with this material my personality improved allot. In my school everyone use to say that you couln't study english but the day i started learning this from this book am getting good marks in my academics. I have also shared it with my friends they too liked this support material & got benefited with it. I would like to recomment you all to download this book & learn."

"Hi I am Mrinmay Bhatacharya. I am currently pursuing my Bachelor's in Business Administration from Savitribai Fule Pune University. After the COVID-19 outbreak it was very difficult to procure the books physically because all the stores were closed. That's when I found out about Kopykitab. Kopykitab helped me a lot specially during the past two years. I was able to get all the books that I needed for my reference and not only that, I got huge discounts from the application. One of the best features that I found out about Kopykitab app was the ability to take notes and print them if needed. So it helped me during my exams as the last minute preparation tool and also the huge cashbacks that I used to get on every purchase. So I would surely recommend Kopykitab to all my buddies and everyone who needs these books. And it is actually really good because it is very mobile. You can carry it anywhere. You can download app and download the books on that app. So it's really mobile. So I would recommend everyone to download this app. Thank you."