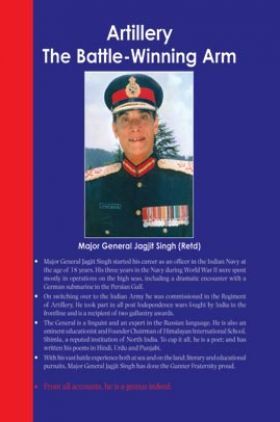 Artillery: the Battle-Winning Arm is a book about the battle winning role played by the artillery. The artillery made its first impart on the Indian soil in 1526, in the first Battle of Panipat, when Babar inflicted a crushing defeat on his opponent, Ibrahim Lodhi. The artillery shot into prominence once again during the rule of Maharaja Ranjit Singh.

Then followed a period of relative stagnation, with the value of the gun confined barely to a supporting role of infantry and armour. It is only during the last two decades that there has been a considerable growth in the expansion of the artillery. The artillery has now emerged as a formidable force of about 250 units, including two artillery divisions, on its order of battle. (Orbat) Further, the artillery of today is equipped with long-range multi-barrel rocket launchers (MBRL’s) and guns capable of firing a variety of lethal ammunition.

1. The Origin of Artillery

3. Artillery of the Mughals

4. Artillery of the Marathas

5. Artillery of the Sikhs

6. Pictorial Glimpse of Artillery during the British Rule in India

9. Battle-Winning Role of the Gunners in Kargil War

11. Regiment of Artillery: Past, Present and the Future