1 a. Explain the term ‘Electric field intensity’ and derive the expression for field due to an infinite line of charge.

b.  Given D = 5rar c/m , prove divergence theorem for a shell region enclosed by spherical surfaces at r = a and r = b (b>a) and centered at the origin.

2 a. Prove that the energy density in an electrostatic field is given by-e E J/m b. Given V = 2x2y-5z at point P(-4, 3, 6). Find the potential, electric field intensity and volume charge density.

c.   Derive the boundary conditions for E and D between two dielectrics.

3     a. State and prove uniqueness theorem.

b.   Derive the expression for capacitance of a coaxial cable using Laplace’s equation.

4 a. State and explain Biot-Savart law for a small differential current element.

b.  Derive the expression for magnetic flux density on the axis of a circular loop of radius ‘a’ carrying current I using Biot Savart law.

c. Vector magnetic potential in free space is given by A = 100e] 5az Wb/m. Find the magnetic field intensity and current density and hence prove Ampere’s circuital law for p = 1.

5 a. Deduce the expression for inductance of a toroidal coil having N turns and carrying a current of I amps.

A sq. loop carrying 2 mA current is placed in the field of an infinite filament carrying current of 15 Amp as shown, fig. Q5 (c). Find the force exerted on the sq.loop. 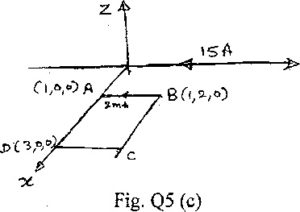 6 a. What do you mean by displacement current and equation of continuity? Derive Maxwell’s I equation fro Ampere’s circuital law.

b. Write Maxwell’s equations in point form and integral form.

7 a. What is meant by ‘uniform plane wave’? Derive the expression for UPW in free space.

b. Deduce the expressions for a and p for a wave traveling in lossy medium.

b. Reflection of plane waves at normal incidence.