1 a. Write the equilibrium equation for 3-D state of stress and state the terms involved. (04 Marks)

b.  Solve the following system of equations by Gaussian elimination method :

2 a. Explain the discretization process of a given domain based on element shapes number and size.

b.  Explain basic steps involved in FEM with the help of an example involving a structural member subjected to axial loads.

b.   Derive shape functions for CST element in NCS.

c.   What are shape functions and write their properties, (any two).

b.   Derive the Jacobian matrix for CST element starting from shape function.

c.   For the composite wall shown in the figure, derive the global stiffness matrix. 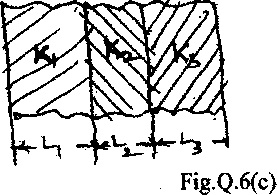 7    a. The structured member shown in figure consists of two bars. An axial load of P = 200 fcN is loaded as shown. Determine the following:

b.  For the truss system shown, determine the nodal displacements. Assume E – 210 GPa and A = 600 mm for both elements.

b.  For the cantilever beam subjected to UDL as shown in determine the deflections of the free end. Consider one element.