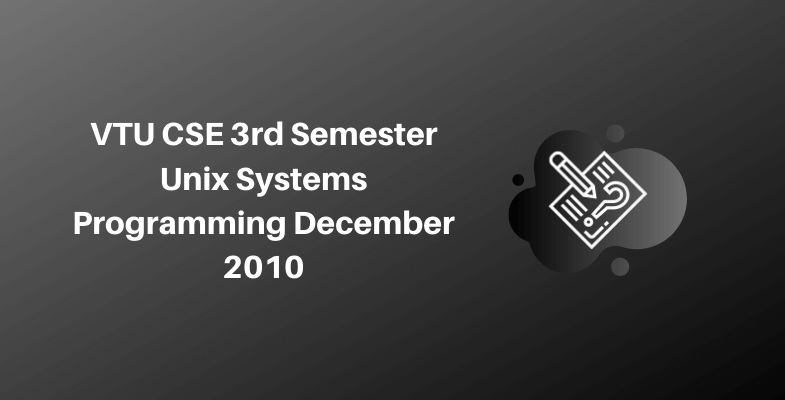 You should solve previous exam papers to boost your exam preparation and secure better marks. It will give you information about the important chapters and concepts to be covered in all chapters.

You must have Object Oriented Programming with C++ Question Paper along with the latest Computer Science 3rd sem Syllabus to enhance your semester exam preparation.

b. What do you mean by term feature test macros? List all the test macros along with their meaning.

C . Write a C++ program to list the values of the following system configuration.

i)     Maximum number of files which can be opened simultaneously.

d. What is an inode? Why are inode unique only within a file system? How does OS maps inode to its file name?

2 a. Discuss the various file types in UNIX or POSIX system.

b. What are the API common characteristics? List any five values of global variables erno along with their meaning whenever API fails.

c. List the difference between hard link and symbolic link. Explain the unix Kernel support for files, with a neat diagram.

3 a. With the help of prototype, explain the following API’s :

b. List the structures used to quarry the file attribute in UNIX. Write C++ program to list the following file attributes of given regular file passed as command line argument.

4 a. With a neat diagram, explain the memory layout of C program.

b. What do you mean by command line argument? Explain with an example.

c. Explain the following, with an example : i) setjmp and longjmp ; ii) setrlimit and getrlimit.

d. What are the different ways in which a process can terminate? Explain with a neat diagram.

5 a. What is a job control? What are the three forms of support from the OS required for job control?

b.  Explain the special feature of fork API, with suitable example.

c.   What is a session? How do you create a session using appropriate shell command?

6 a. What is the signal mask? Explain with prototype and example.

b.  With a neat diagram, explain the method of error logging.

c.   What are daemon processes? List their characteristics. Write the rules to code a daemon.

7. a. What do you mean by pipes? List out their limitations. Write a C program that sends “Hello World” message to child process through the pipes.

c.   What are the three different ways in which client and server process can get access to same IPC structure? Explain with different prototypes.

8 a. What is a socket? Describe the socket options. Explain with suitable functions. (08 Marks)

b.  Write short notes on the following :

We have covered VTU CSE 3rd Semester Unix Systems Programming December 2010. Feel free to ask us any questions in the comment section below.