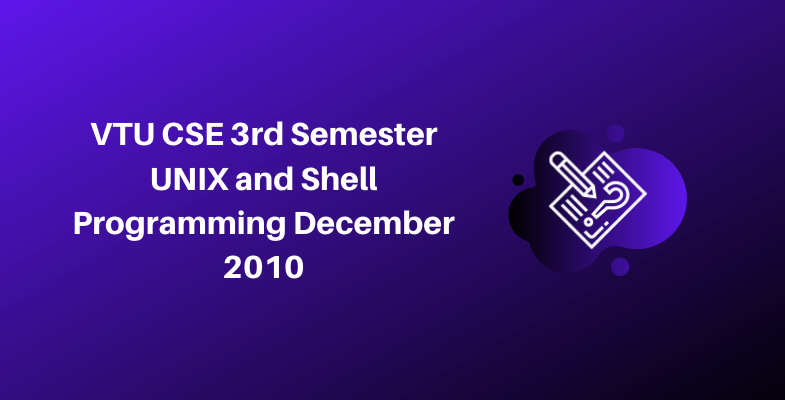 To secure better marks in the exam, you should practice as many question papers as possible. It will give you information about the important chapters and concepts to be covered in all chapters.

Here we are providing you the complete guide on VTU CSE 3rd Semester UNIX and Shell Programming December 2010.

You must have Object Oriented Programming with C++ Question Paper along with the latest Computer Science 3rd sem Syllabus to enhance your semester exam preparation.

1 a. Discuss the salient features of the UNIX operating system.

C. Describe the relationship between the kernel, shell and the user, with the help of a diagram.

2 a. Explain the following commands:

b. Discuss the various approaches of setting file permissions in UNIX.

c. Differentiate between hard links and soft links to files, with examples.

3 a. With a suitable sketch, explain the modes of operation of the vi editor.

b. Explain the commands “search for pattern” and “search and replace” in vi editor.

c. What is command substitution in UNIX? Give one example.

4 a. What is the application of the following files?

b. Discuss the various commands for job control in UNIX, with examples.

c.  Explain how the shell process is created.

5 a. Discuss the following commands as related to communication in UNIX:

b. List and explain the environment variables in UNIX.

6 a. Discuss sort command, with any five options.

b. Describe with examples, how test and [ ] are used to evaluate expressions in shell programming.

c. What is the significance of set command in shell programming? Explain.

7 a. State the built-in variables used in awk and explain each one of them.

b. Write a Perl program that prompts a user to input a string and a number and prints the string that many times, with each string on a separate line.

c. Discuss the string handling functions in Perl, with examples.

8 a. Write a note on ‘tar’ command and its options.

b. Mention the various privileges of the super user and explain them.

c. What is the significance of mounting and unmounting files in UNIX? Explain.

We have covered VTU CSE 3rd Semester UNIX and Shell Programming December 2010. Feel free to ask us any questions in the comment section below.