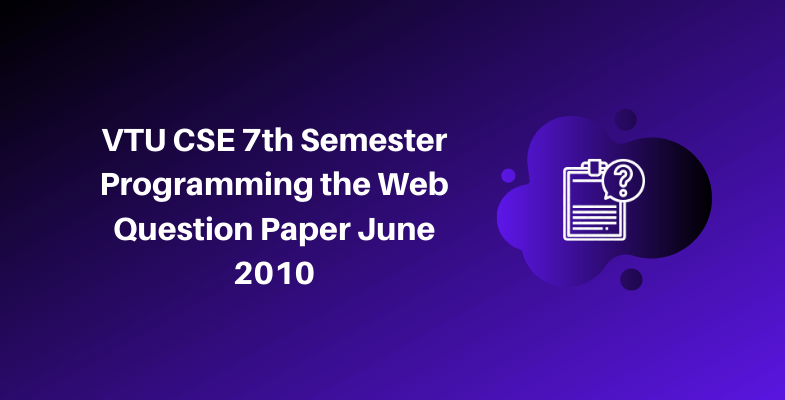 VTU CSE 7th Semester Programming the Web Question Paper June 2010: VTU CSE 7th Semester Programming the Web Previous year Papers are considered as the best study materials to score good marks in the semester exam. Practicing these previous year question papers assist the students to get a clear idea about the question paper pattern and types of questions that will be asked in the exam.

You must have Programming the Web Question Paper along with the latest Computer Science 7th sem Syllabus to enhance your semester exam preparation.

Here we are providing you the complete guide on Programming the Web Question Paper June 2010.

To score better marks in the 7th semester, you should also have depth knowledge in the entire subject. You can boost your preparation by solving previous year question papers. It will give you information about the important chapters and concepts to be covered in all chapters.

1 a. Explain atleast two uses of the following :

b. Explain with an example the following tags :

2 a. Explain the following, with respect to table creation in XHTML documents :

i) Align and valign attributes

b. Create XHTML document to describe a table with the following contents :

c. The columns of the table must have the headings pine, maple, Oak and fir. The rows must have the labels average height, average width, typical lifespan and leaf type. Fill the data cells with some values.

3 a. Explain the following CSS tags, with an example for each :

b. Create an XHTML document that includes atleast two images and enough text to precede the images, flow around them (one on the left and one on the right) and continue after the last image (NOTE : use CSS tags for the problem).

4 a. Describe briefly three major uses of Java script on the client side.

b.   Describe briefly the basic process of event-driven computation.

c.    Write a function in java script to check whether the given string has the form string 1, string2 letters where both strings must be all lowercase letters except the first letter and “letter” must be upper case. If the string is of the given format the function should return true or false otherwise.

5 a. What are the two ways in which an event handler can be associated with an event generated by a specific XHTML element in the DOMQ event model?  (06 Marks)

b. Describe the approach to addressing XHTML elements using forms and elements.

c. Write XHTML file and java script, scripts to sort a set of number in either ascending order or descending order. The sorting order is input from the user which is either “ascending” or “descending”. The sorted numbers should be displayed with proper headings.

6 a. Explain the following, with an example each :

b.   Write an XHTML document to display an image and three buttons. The buttons should be labeled simply 1, 2 and 3. When pressed, each button should change the content of the image to that of a different image.

7 a. Explain the three types that can be used to describe data in an element declaration, with an example for each.

b. What are the four possible parts of an attribute declaration in a DTD?

8 a. In what three fundamental ways do Perl arrays differ from the arrays of other common high- level programming languages? Give examples for each.

c.    What are the three categories of operations that are essential in web documents but that cannot be done with XHTML?

d.  Briefly explain why should a file to be read or written by a CGI program be locked against multiple simultaneous operations.

We have covered VTU CSE 7th Semester Programming the Web Question Paper June 2010. Feel free to ask us any questions in the comment section below.