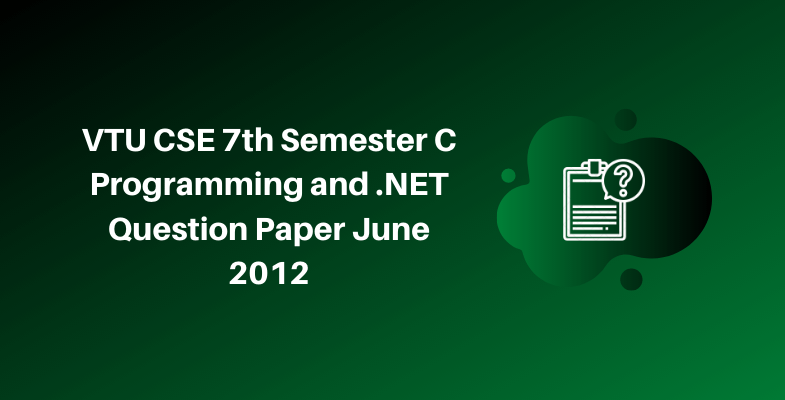 VTU CSE 7th Semester C Programming and .NET Question Paper June 2012: Every semester has an important role to shape the Computer Science & Engineering Career. It will give you information about the important chapters and concepts to be covered in all chapters.

You can boost your preparation by solving previous year question papers. To score better marks in the 7th semester, you should also have depth knowledge in the entire subject. It will give you information about the important chapters and concepts to be covered in all chapters.

You must have C Programming and .NET Question Paper along with the latest Computer Science 7th sem Syllabus to enhance your semester exam preparation.

Here we are providing you the complete guide on C Programming and .NET Question Paper June 2012.

VTU CSE 7th Semester C Programming and .NET Previous year Papers are considered as the best study materials to score good marks in the semester exam. Practicing these previous year question papers assist the students to get a clear idea about the question paper pattern and types of questions that will be asked in the exam.

Here you can check the C Programming and .NET Question Paper June 2012

1 a. What are the building blocks of .NET platform? Give the relationship between .NET runtime layer and the base class library.

b. What is the role of • NET type meta data? Give an example.

c.   Explain CLR. Illustrate the workflow that take place between the source code, given «NET compiler and the . NET execution engine.

i) current directory of application

b. Explain the building of a Cti application using command line compiler CSE.exe.

3 a. why system object is called master node? List and explain any three instance methods and static methods of system object.

b- With an example, explain what happens when reference type is passed by value and passed by reference.

c. What arc the three pillars of object oriented programming in C#? Differentiate between “is – a” and “has -a” relationship, with appropriate programs.

4 a. Explain boxing and un boxing with an example.

b. Explain four method parameter modifiers, with an example.

c. Explain the two different roles of this* keyword, with an example.

5 a. What arc bugs, errors and exception? List and explain the core members of the system exception type. How would you build custom exception?

c. What is meant by object life time? Explain the garbage collection optimization process in C#.

6 a. What is an interface? Explain the three methods to obtain interface references.

b. With an example, explain any four interfaces of system, collection.

c. How to build cloneable and comparable objects in C#?

7 a. With an example, discuss the advanced keywords of C# : checked, unchecked, unsafe, stack alloc, volatile and size of

b.  What is delegate? Differentiate between synchronous and asynchronous delegate, with examples.

8  a. With a neat diagram, explain the physical view and logical view of. NET    assemblies.

b. Explain the C# support for cross language inheritance, with examples.

c. Explain the steps involved in building multi file assembly, with an example.

We have covered VTU CSE 7th Semester C Programming and .NET Question Paper June 2012. Feel free to ask us any questions in the comment section below.