1 a. Define a control system. Explain the difference between open loop and closed loop control systems with one example for each.

ii) Write the differential equation of the system. 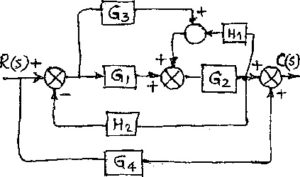 2 a. Obtain of the system shown in fig.2(a) by using block diagram reduction method:

b.   Draw the signal flow graph for the system of equation given below and obtain the using MGF

3  a. For a spring mass damper system shown in fig.3(a), an experiment was conducted by applying a force of 2 Newtons to the mass. The response x(t) was recorded using an xy plotter and the experimental result is as shown in fig.3(a) below. Find the values

4 a.  Derive the condition on the impulse response so that the system is bounded input bound output (BIBO) stable.

5  a.   State the different rules for the construction of root locus.

b.Sketch the root locus diagram of a control system having,

b.  Sketch the Nyquist plot of a unity feedback control system having the open loop transfer function G(s) = —{        r. Determine the stability of the system using Nyquist s(l-s) stability criterion.

b.  With figure define the frequency domain specifications.