2. Missing data, if any, may be suitably assumed.

b. For the mechanical system shown in fig. 1(b)

b. For the signal flow graph shown in the fig.2(b), obtain transfer function Y7/Yl and 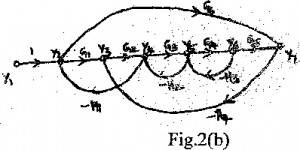 3 a. The relation of the response Y(s) to the excitation R(s) in the presence of the undesired disturbance D(s) is represented by the fig.3(a). Determine K such that, with R(s) = 0, the output Y(s) = 0 for any disturbance D(s).

4 a. What are static error coefficients? Derive expressions for the same.

b.  Explain the following time domain specifications of a second order system:

b. Draw the root locus diagram for the loop transfer function G(s)h(s) = -r-z\

b.  State Routh-Hurwitz stability criterion. The system shown in fig.6(b) oscillates at a frequency of 2 radians/sec. Using R-H criterion determine the values of ‘K’ and ‘a’.

7 a. The open loop transfer function of a unity feed back control system is given by KG(s) =. Draw the asymptotic Bode plots and hence find the value ofv/ s(l + 0.02sXl + 0.05s)\ ‘K’ for which the gain margin is 10 dB. What is the corresponding phase  margin?

b.  Estimate the transfer function from the Bode plot shown in fig.7(b). Digits on line indicate slope in dB/dec.