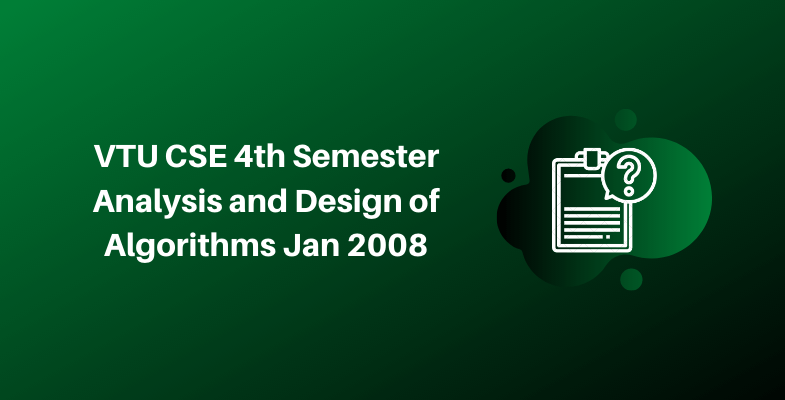 VTU CSE 4th Semester Analysis and Design of Algorithms Question Paper Jan 2008: To score better marks in the 4th semester, you should have depth knowledge in every subject. You can boost your preparation by solving previous year question papers. I will give you information about the important chapters and concepts to be covered in all chapters.

Here we are providing you the complete guide on VTU CSE 4th Semester Analysis and Design of Algorithms Question Paper Jan 2008.

You must have Analysis and Design of Algorithms Question Paper along with the latest Computer Science 4th sem Syllabus to enhance your semester exam preparation.

1 a. What do you mean by a stable algorithm and an algorithm is inplace? Explain the same and give an algorithm to sort a given list of numbers which should be stable but not inplace

b.  What are the differences between set and multiset? Compare it with list. Explain with example two ways of defining sets.

c.   Give three different algorithms to compute gcd of given two positive numbers and comment on their performance.

b. Give the general plan for analyzing the recursive algorithms. Mathematically analyse the tower of Hanoi problem, clearly indicating the steps and comment on its complexity.

3 a. What is brute force method? Explain the exhaustive search technique. How would you apply it to a job assignment problem? Explain with suitable example. Analyse for complexity.

b.  Give the general divide and conquer recurrence and explain the same. Give the Master’s theorem and explain with example how would you apply it to solve the recurrence.

4    a. Explain the concepts of divide and conquer methodology indicating three major variations of same.

b.  With suitable example explain Johnson trotter algorithm to generate permutation of given objects.

c. Give BFS and DFS algorithm. Clearly bring out the differences and comment on the complexity.

5 a. What is an AVL tree? Explain four types of rotations used to construct AVL tree. Construct an AVL tree for the list 5, 6, 8, 3, 2, 4, 7 showing clearly successive insertions.

b. What is a heap? Give an algorithm to construct a heap for the elements of given array by bottom up approach. What is its complexity? Show heap construction for the given list 2, 9, 7, 6, 5, 8 stage by stage.

b. What is a Huffman tree? Explain it with suitable example and give Huffman’s algorithm.

c.   Give Dijkstra’s algorithm. What is its complexity? Discuss with a simple example.

8    a. Explain backtracking concept and apply the same to n-queen’s problem.

We have covered VTU CSE 4th Semester Analysis and Design of Algorithms Question Paper Jan 2008. Feel free to ask us any questions in the comment section below.