Attempt overall Five questions selecting one question from each unit. All questions carry equal marks. Any missing data may be suitably assumed and stated.

1. a) What is a free body diagram? Discuss various steps involved in drawing such diagram.

b) Determine the resultant of the co-planar system of concurrent forces as shown in Fig.l. 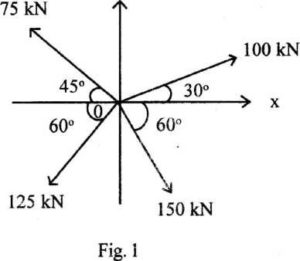 a)  State and prove varigon’s theorem. 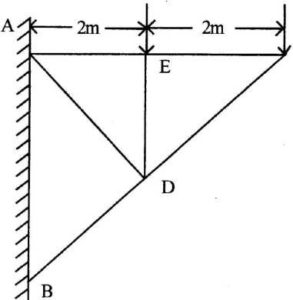 b) Determine the forces in all the members of a cantilever truss shown in Fig.2

2. a) Differentiate between angle of friction and angle of repose.

b) A ladder of weight 390 N and 6m long is placed against a vertical wall at an angle of 30° with wall. The co-efficient of friction between the ladder and the wall is 0.25 and that between ladder and floor is 0.38. Find how high a man of weight 1170N can ascend, before the ladder begins to slip.

a)  State the principle of virtual work.

b)  Two beams AC and CD are hinged at C and are supports by rollers at A and D. A hinge support is provided at B as shown in Fig. 3. Using principle of virtual work, determine the reactions at the hinge C and at support B, when a load of 600 N is acting at point E.

3.  Find the moment of inertia of the section shown in Fig. 4 about centroidal X-X and Y-Y axes.

a)  Differentiate between a reversible machine and a self locking machine.

b)  An open belt drive connects two pulleys 90 cm and 60 cm diameter mounted on two parallel shafts 3 m apart. The maximum belt tension is 2000 N. The co-efficient of friction is 0.3. The driving pulley of diameter 90cm runs ai 300 rpm. Find the power transmitted, torque acting on each shaft, and initial tension in the drive.

4.  a) A body falling freely under the action of gravity passes two points 20m apart vertically in 0.4 seconds. From what height, above the higher point, did the body start to fall? Take g = 9.8m/s2.

b)  A particle is projected from a point on an inclined plane with a velocity of 30 m/sec. The angle of projection and the angle of plane are 55° and 20° to the horizontal respectively. Show that the range up the plane is the maximum for the given plane. Find this range and the time of flight.

a)  State D’Alembert’s principle giving equations expressing the above principle for a rigid body in plane motion.

b)  Two blocks of weight 800N and 200N are connected by a string and move along a rough horizontal surface under the action of a force 400N applied to the first weight of 800N in horizontal direction. The co-efficient of friction between the sliding surfaces of the blocks and the plane is 0.3. Determine the acceleration of the system of blocks and the tension in the string using D’Alembert’s principle.

5. a) State and prove the law of conservation of energy.

b)  Find the work done in drawing a body of weight 500 N through a distance of 5 m along a horizontal surface by a force of 200 N, whose line of action makes an angle of 30° with the horizontal.

c)   A block of weight 12 N falls at a distance of 0.75m on top of the spring. Determine the spring constant if it is compressed by 150 mm to bring the weight momentarily to rest.

a)  State the Impulse – Momentum relation.

b)  A ball of 2 kg is thrown straight up into the air with an initial velocity of 15m/sec. Calculate the time of flight of the ball using impulse momentum theorem.