1.  a) The following data refer to a mild steel specimen tested in a laboratory.

v) Safe stress adopting a factor of safety of 2.

b) Find the extension of a bar uniformly tapering from diameter ‘d] ’ at one end to diameter ‘d2’ at other end subjected to an axial tensile load P at both ends. Length of bar is taken as ‘L’.

a)  Show that relation between E, K, C. is given as Where : E = Young’s modulus K = Bulk modulus C = Modulus of rigidity.

2.a) Draw shear force and bending moment diagrams for the cantilever shown in fig.

b) A cast iron beam 2.75 m long has one support at the left end and the other support at 0.75 m from the right end. The beam is of T section consisting of a top flange 150 mmx20 mm and a web 20 mm wide and 80 mm deep. If the tensile stress and compressive stresses are not to exceed 40 N/mm2 and 70 N/mm2 resp. Find the safe concentrated load W that can be applied at the right end of the beam.

b) Find the reactions at the fixed end of the cantilever loaded as shown in fig. Draw also the SFD and BMD.

3. (a) The intensity of resultant stress on a plane AB (as shown in fig ) at a point in the material under stress is 80 N/mm2 and is inclined at 30° to the normal to that plane. The normal component of stress on another plane BC. at right angles to the plane AB is 60 N/mm2. Determine the following :

i)The resultant stress on the plane BC.

ii)The principal stresses and their directions. 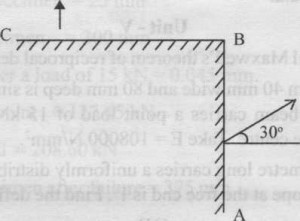 b) Explain different theories of Elastic failures. Also explain their significance and applications.

i) both ends pin jointed

ii) one end fixed and other hanged

a)  Two shafts of the same material are subjected to the same torque. If the first shaft is of solid circular section and the second shaft is of hollow section whose internal diameter is 2/3 of the outside diameter. Compare the weights of two shafts.

b)  What are the assumptions made in Euler’s theory? Also explain the limitations of Euler’s formula.

5. a) Explain in detail Maxwell’s theorem of reciprocal deflection.

c)   A cantilever 3 metre long carries a uniformly distributed load over the entire length. If the slope at the free end is 1°. Find the deflection at the free end.(4)

b) Figure shows a simply supported beam of uniform section whose moment of inertia is 4.3 * 108mm4. For the loading shown, find the position and magnitude of maximum deflection. Take E = 200 kN. per mm2.