I. (a) Differentiate class and object in Object Oriented Programming.

(d) How do we declare and use array of pointers?

(f) We use colon (I) operator for various purposes. Explain each one with a small example.

(g) Explain with examples the string functions insert () and replace ( ).

(b) What will be the value of X and y after execution of the following codes? Justify you answer.

III. (a) Distinguish between function declaration, definition and call with suitable example.

(b) We provide ‘return O;’ as the last statement of main. What does it indicate?

(c) What is abstraction? How is it useful in Object Oriented Programming?

IV. (a) How do we invoke a constructor function? Give examples.

(b) Define a class ‘string’ as a user-defined data type with 2 constructors – to create uninitialized string object and to create objects with string constants.

VI. (a) Write a code template for the following inheritance structure. 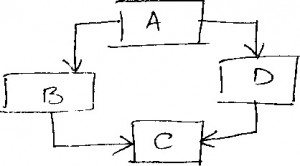 (b) Write a program to declare a void pointer and three variables – int, float and char. Use the pointer to assign values to these three variables and display them using ‘count’.

IX. Write the general format for class template and function template. What is the difference between them?

‘Seekg ( )’ moves get pointer to a specified location. Let‘file’be the stream object. Write function calls to move get pointer to

(iv) Backward ‘u’ bytes from the end.