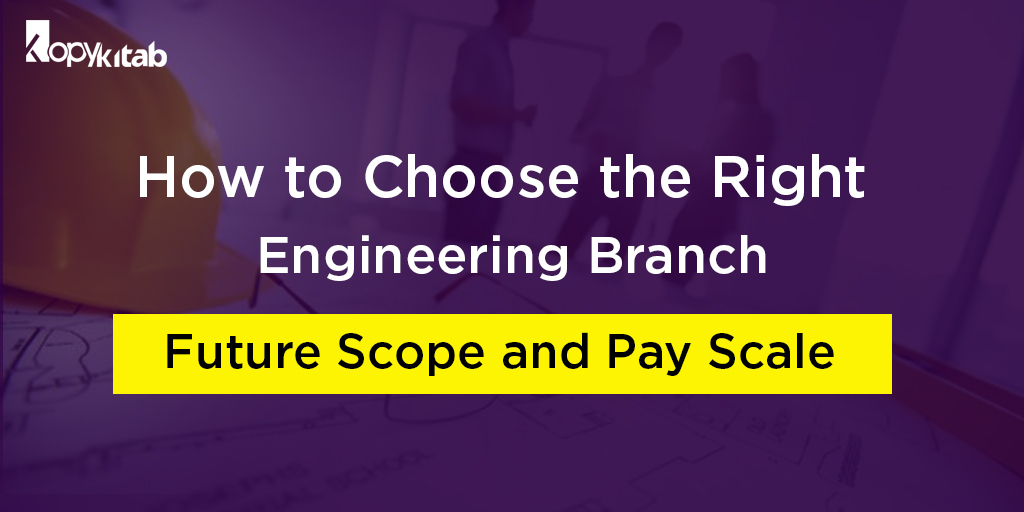 The path to turning your dream of making it to an engineering college a reality is often long and daunting. For most students, the preparation begins well in Class 11, and the high-pressure Class 12 board exams are followed by a string of entrance exams – JEE Mains, JEE Advanced, CET, VITEEE, WBJEE, BITSAT, and several other state-level entrance tests. Once these exams are over and the results are in your hands, you think that you have won the battle, except your challenges are far from over. As you gear up to attend counseling for admission in different colleges, it is time to start researching engineering branches and their scope, as your entire career rests on this all-important decision.

With more and more engineering colleges springing up, the choice of cherry-picking a branch is no longer limited to toppers. Even an average student has an abundant scope of aiming for some of the highest paid engineering branches. But then there is also the question of your own aptitude and a bombardment of tips to choose the best engineering branch to make that choice more complex.

The course entails Engineering books such as Electrical Machine Design, Engineering Mathematics, Power Systems, Power Electronics, Control Theory, Electromagnetism, Micro Controllers, Power Utilization and Safety Management and is a mix of theory classes and practical sessions. There is also an option for specialization through a Master’s program after completing your BE/BTech degree. Industry-oriented short term technical courses are also highly recommended to improve your prospects of employment.

In terms of employment avenues, this branch is considered evergreen, which means there will be sufficient job opportunities upon completion of your degree. There are excellent opportunities for electrical engineers in both the private sector as well as government jobs. Some of the top employers for this branch of engineering include:

These agencies may employ electrical engineers in the following job profiles, depending on experience:

The starting salary for this branch of engineering is in the range of Rs 1.5-3 lakh per annum and goes up to Rs 10-15 lakh per annum with 10-12 years of experience.

Over the past decade, IT or computer science engineering has emerged as one of the most sought-after branches of engineering, thanks to the unbridled boom of the IT sector. Even though the scope of government jobs for CS engineers in India is somewhat slim owing to the limited focus on innovation, R&D, and manufacturing of electronics in the public sector, the lucrative jobs in the private sector more than make up for it.

The major openings for employment avenues here come from the service sector, as every conceivable field today, be it banking, railways, insurance, airlines, hospitality or hospitals, is in need of software solutions to streamline their operations. In addition to this, almost all devices being manufactured today run on microchips and processor controls driven by software. Filling in this space are a host of companies, from multi-national giants to startups, who are always on the lookout for beginners as well as honed professional to take on the roles of software development, coding, testing, and support.

The long and short of it is that CS engineers have been heavily in demand for some time now and that demand isn’t going to wane away.

Some of the top employers for CS engineers include:

Apart from these top names, there are hundreds of other companies looking to hire IT engineers. The top job profiles for CS engineering include:

The pay packages for CS engineers vary vastly too. Tech giants like Google and Facebook have a history of hiring IIT graduates at mind-blowing annual packages going up to Rs 1 crore. While such cases are exceptional, it is not unusual for fresh CS engineering graduates to land a pay package of Rs 6.5 to 8.5 lakh per annum. The expected salary for an average student starting out in this field is around Rs 2.4 lakh.

You’d be required to burn the midnight oil studying mechanical engineering but it’ll all be well worth it since heavy-manufacturing industries such as metal, steel, automobile, forging, and mining seek a steady inflow of fresh graduates from this field.

As with electrical engineering, there are ample employment avenues in both private and government jobs. Some of the top employers for this branch of engineering are:

The job profiles for mechanical engineers include:

The starting salary for this branch of engineering is in the range of Rs Rs. 1.8 Lakh to Rs. 5 lakh per annum and goes up to Rs 10-15 lakh per annum with 10-12 years of experience.

At the beginning of the 20th century, civil engineers were immensely sought-after in India, as the country was going through an infrastructure overhaul and civil engineers were needed for building bridges, dams, airports, railheads and ports. However, as these development projects plateaued from the 1970s through the 1990s, the demand for civil engineers nosedived too. This resulted in a vacuum in the sector with a major dearth of trained professionals to handle the second-wave of infrastructure boom that hit the country around the turn of the century. Consequently, over the last 20 years or so, civil engineering has made a comeback as an important engineering branch with promising opportunities in both private and government jobs.

Since all large-scale construction projects require architect, supervisors and site engineers, some of the biggest private and public sector players hire fresh civil engineering graduates from time to time. Some of the top employers for this branch of engineering include:

For job profiles of:

This is often considered an off-beat branch of engineering, and since, there are not many takers for this course, fewer colleges offer it. However, if you look at the salary of engineers branch wise and the scope of engineering branch wise, chemical engineering is a secure branch to pursue. It not being one of most sought-after branches of engineering also means lesser competition in securing a seat in a college of your choice as well as landing a job.

If you have the aptitude for subjects like Organic Chemistry, Inorganic Chemistry, Biochemistry, Fluid Mechanics, Safety Technology, Thermodynamics, Fertilizers, Process Control, Petrochemicals, Equipment Design, Chemical Reaction Engineering, Chemical Plant Design, and Chemical Processes, this might just be the right fit for you. Specializations such as Biochemistry, Nanotechnology, Petrochemicals, Chemical Synthesis, and Fertilizers can further bolster your career prospects in this field.

This is also one of the tougher branches of engineering as mastering subjects like organic and inorganic chemistry is no mean feat. However, your hard work will be rewarded with a well-paying job and stable career in industries such as refining, chemical, pharmaceuticals, and food processing. Some of the top employers for this engineering branch are:

For the job profiles of:

The starting salary for this branch of engineering is in the range of Rs 4 – 8.5 lakh per annum and goes up to Rs 12 to 30 lakh per annum with 10-12 years of experience.

If you aren’t keen on mainstream jobs, an engineering degree can also open up avenues for bank jobs, RRB jobs, SSC jobs and help with railway exam preparation. Weighing the pros and cons of engineering branches and their scope vis-a-vis your own aptitude is the best way to make the right choice.