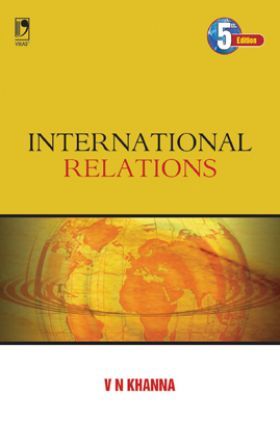 The fifth edition of International Relations covers the subject from the historical perspective—from the eve of the First World War to the end of the Cold War and beyond. This book is divided into two sections—the first deals with the theoretical perspectives, while the second provides an historical overview of events. These include the two World Wars, problems faced in peace-making, system of alliances, search for security, Nazism and Fascism, rise of communism, the arms race and disarmament, the Cold War and its end, Non-Aligned Movement, and the emergence of regional organizations. The book is a useful resource for teachers and students of history and political science, those appearing for civil services examinations, as well as those interested in international relations.

Audience of the Book :
This book Useful for history and political science students.
Key Features:

1. Thoroughly revised and updated to cover the latest developments

3. Covers recent historical developments such as the Gulf War and the new international economic order

7. The Peace of Paris

8. The League of Nations: Structure and Functions

9. The Search for Security

16. Appeasement and Prelude of the War

18. The League of Nations—A Peace-maker

23. Communism in China and the War in Korea

24. Decolonization: Emergence of the Third World

25. Evolution of the Cold War

26. Detente and the End of Cold War