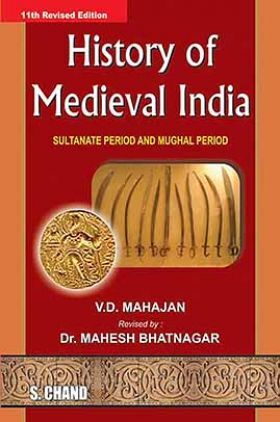 ‘‘History of Medieval India’’ The favourable and warm reception which the previous editions and reprints of this book have enjoyed all over India, is a matter of great satisfaction for us.

In this edition in Part-I a New Chapter No. 1 ‘Sources of Information for Medieval India’ and in Part-II chapter no. 10 ‘‘History of Mughal Period’’ (till 1761) have been incorporated. Almost all the topics have been thoroughly gone through, presented lucidly.

Many topics of this book have been re-written and restructured.

Error which have come to our notice have been rectified.

Modified maps have been inserted at appropriate places.


Audience of the Book :
This book is useful for BA MA students of History of all Indian Universities and other competitive examinations like PCS and IAS.

1 Sources of Information for Medieval India

2 The Rise of Islam

4 India on the eve of Muslim Conquest

5 Rise and fall of the Ghaznavides

6 Muhammad Ghori or Muhammad of Ghur

7 The Slave Dynasty 8 The Khalji Dynasty

13 Disintegration of the Delhi Sultanate

21 Impact of Muslim Conquest on India

22 Nature of The State in Medieval India

25 India on The Eve of Baburs Invasion

33 Rise of the Marathas

35 Rise and Growth of Sikh Power

37 Art and Literature in Mughal India

41 Disintegration of the Mughal Empire

42 Society of Culture in the 18th Century

43 History and Historians of Mughal India