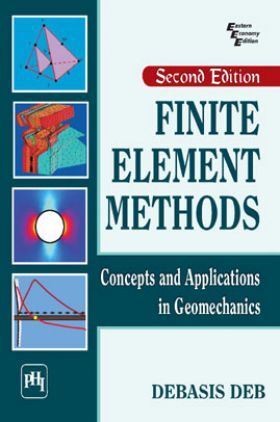 Computational geomechanics is an emerging field in the disciplines of Mining, Civil and Geotechnical Engineering. Recent advancements in finite element methods (FEMs) have made it possible to solve a variety of complex problems related to geomechanics. This thoroughly revised second edition enhances the knowledge of the finite element methods in design and analysis of structures and excavations made in rock mass. A fine blend of finite element methodology and principles of rock mechanics, the text emphasizes the basics of stress–strain analysis, anisotropic material behaviour, isoparametric finite element method, rock mass yielding/failure behaviour and its formulation in FEM procedure, rock joint behaviour as equivalent material and discrete system. Analytical and numerical formulations of interaction between rock bolts and rock mass are introduced emphasizing parameters which affect bolt performance.

Audience of the Book :
This book Useful for Mechanical Engineering Students.
Table of Content:

1. Analysis of Stresses and Strains

"Hi My name is Siddhesh Tamboli and am studying B. Pharmacy course & am in a 3rd year, from the first year itself i have started using KopykKtab App as it is available is less price as compared to market price also it is best in comparision to hard books, so some how i feel everyone should refer KopyKitab App. Thankyou KopyKitab App for this initiative!!!"

"Hello everyone, My name is Saloni and I am from career college Bhopal. I'm doing my B. Sc. graduation in physical nutrition and dietist because of my new subject, I couldn't find my books in the online app or online market. So someone recommended me about the Kopykitab app. I installed this app and started using it. When I searched my clinical nutrition books on this app they were actually available in the ebook form and it was more helpful and useful for a hard copy. So I would like to recommend everyone to use at least Kopykitab app. It is very helpful, easy and more useful. Thank you."

"This is Saravanya, Assistant Professor from Department of Computer Science. I have downloaded KopyKitab app three, four months before and this app was very useful for me. I can download previous year question papers of UGCNET examination and I'm preparing for my examinations through this app. I downloaded an open source technology book also from this app and it is very useful for me to read a book through offline mode. Thank you Kopykitab."